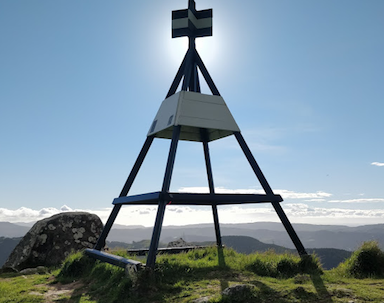 "Well done to all the teams who took part in the 2019 Big Trig. I hope you enjoyed exploring some of the fantastic bush around Porirua. This was a tough course with big hills and deep gullies. Looking at the results, the winning teams all went for the high points that were deep in the gullies. So well done. Hopefully the the points rewarded your efforts. Only a couple of teams went as far North as Titahi Bay — which is what we had hoped for. There was some more more interesting terrain in the bush so well done on taking on the challenge. All teams that claimed 32 were rewarded with the points (I think a cow ate the ribbon). All other CPs had the majority of teams find the ribbons. Well done, and hopefully we will see you again at next year's rogaines."

Here are the 2019 results first published 2 Dec. Some mathematical errors have been fixed on 3 Dec, and a rather significant one on 12 Dec. This affected the placings in the 3hr category. You can see where teams went via the Strava Flybys feature (thanks for the link Mark). You'll need to de-select a number of non-rogainers, mostly down the bottom of the Flybys list.